One of Guatemala forms of transportation is called a tuk tuk or in Asian countries a rickshaw. Guatemala is loaded with these little three wheel vehicles running around taking people from place to place. A Central America form of a taxi. 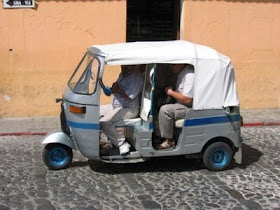 When in Antigua I like to ride these little vehicles myself. The traffic in Guatemala is terrible and with these little tuk tuk's they can weave in and out of traffic.

Here is a web link to one of my favorite web sites for Antigua Guatemala - TukTuk Meeting.

Per Wikipedia,
Central and South America
The mototaxi or moto is the Central American and Peruvian incarnation of the auto rickshaw. These are most commonly made from the front end and engine of a motorcycle attached to a two-wheeled passenger area in back. Commercially produced models, such as the Indian Bajaj brand, are also employed. In Guatemala the commercial vehicles are referred to as tuk-tuks.
Tuk-tuks operate, both as taxis and private vehicles, in Guatemala City, Guatemala, around the island town of Flores, Peten, in the mountain city of Antigua Guatemala, and in many small towns in the mountains. In 2005 the tuk-tuks prevalent in the Lago de Atitlán towns of Panajachel and Santiago Atitlán all appeared to be from India (Bajaj Auto).
Three-wheeled Coco taxis, resembling a coconut, are used in Havana, Cuba.

Here is a vehicle that we are starting to see on the streets in some communities in Florida; 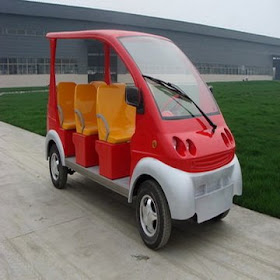